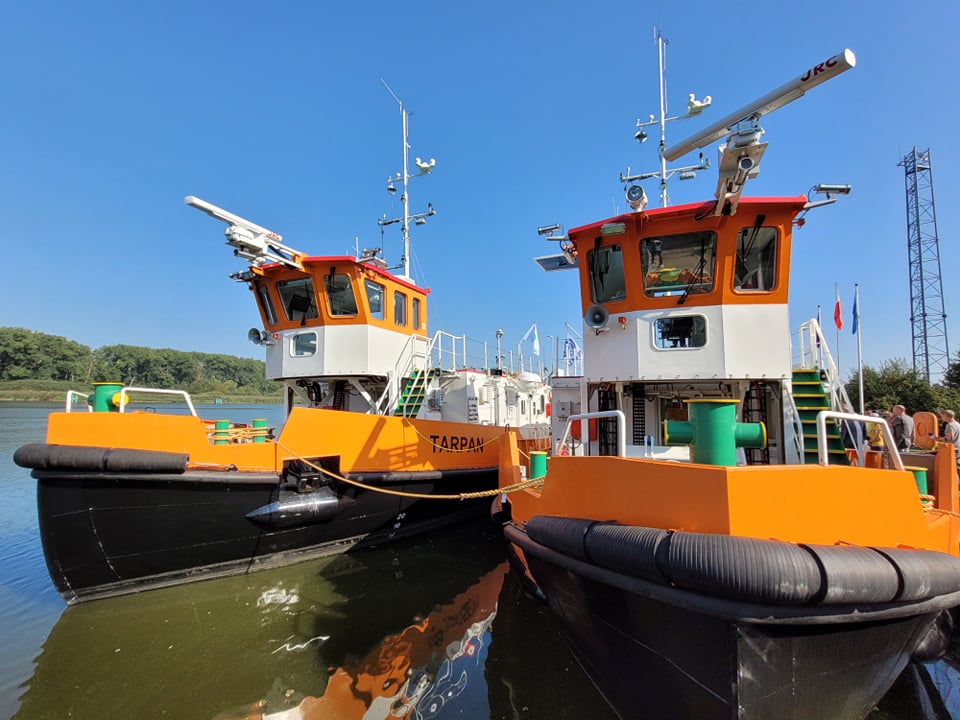 Ocelot and Tarpan – two new icebreakers built by Remontowa Shipbuilding SA shipyard in Gdańsk sailed into Szczecin. Today, i.e. on Friday, 10th September, during the press conference, the presentation of these most modern icebreakers in Poland took place.

– We are proud of this investment, because there will be a real generation change in our fleet. The most worn out vessels will retire, and icebreakers perfectly tailored to the needs of the Szczecin Water Junction will go on the water – says Marek Duklanowski, director of the Polish Water Authorities in Szczecin.

– They are in the top class. Modern, comfortable, aesthetic and very functional. Working on these vessels is a completely new quality. We like the individual tailoring of the drivers to the needs of the Oder River,” says Jerzy Fitas, icebreaker captain at RZGW Szczecin.

– These are certainly some of the most modern units of their type in Europe. Tailored to the individual needs of our river. The icebreakers are light, linear, and will sail behind the front icebreakers during icebreaking actions – says Marek Duklanowski, director of Wód Polskie in Szczecin.
– The key thing is modernity. We have a completely different drive, the draught is 1.4 metres, which is less than heavier icebreakers. This is important, because the Oder and Lake Dabie are relatively shallow bodies of water. High power, modern navigation, state-of-the-art technology – adds Duklanowski.

It is a prototype which has to prove itself on the ice now. On water it works perfectly. Modernity is seen here both in the wheelhouse, the welfare facilities and below deck. Here we have a 12-cylinder, powerful engine. We took part in ongoing consultations during the construction of both icebreakers. We are satisfied with the results – adds the captain.

The cost of the construction of two icebreakers for the Polish Waters in Szczecin is more than 30 million PLN, most of which is co-financed by the Operational Programme Infrastructure and Environment 2014-2020 under the Cohesion Fund. The new icebreakers will take part in the action already in this winter season. In 2021, the icebreaking action will last 21 days.

The launching of the first icebreaker – Ocelot – took place on 4 March this year, and less than two weeks later,icebreaker Tarpan was lowered into the water. These are modern ice-class vessels. They are equipped with efficient Caterpillar diesel engines. Their wheelhouses are raised hydraulically by means of scissor systems, so that in the working (raised) position during crushing and breaking up the ice the captain’s visibility is as good as possible, while during the approach to the bridge: the wheelhouse, hydraulically lowered mast or removable barriers on the superstructure enable the crew to reach the blockage efficiently.