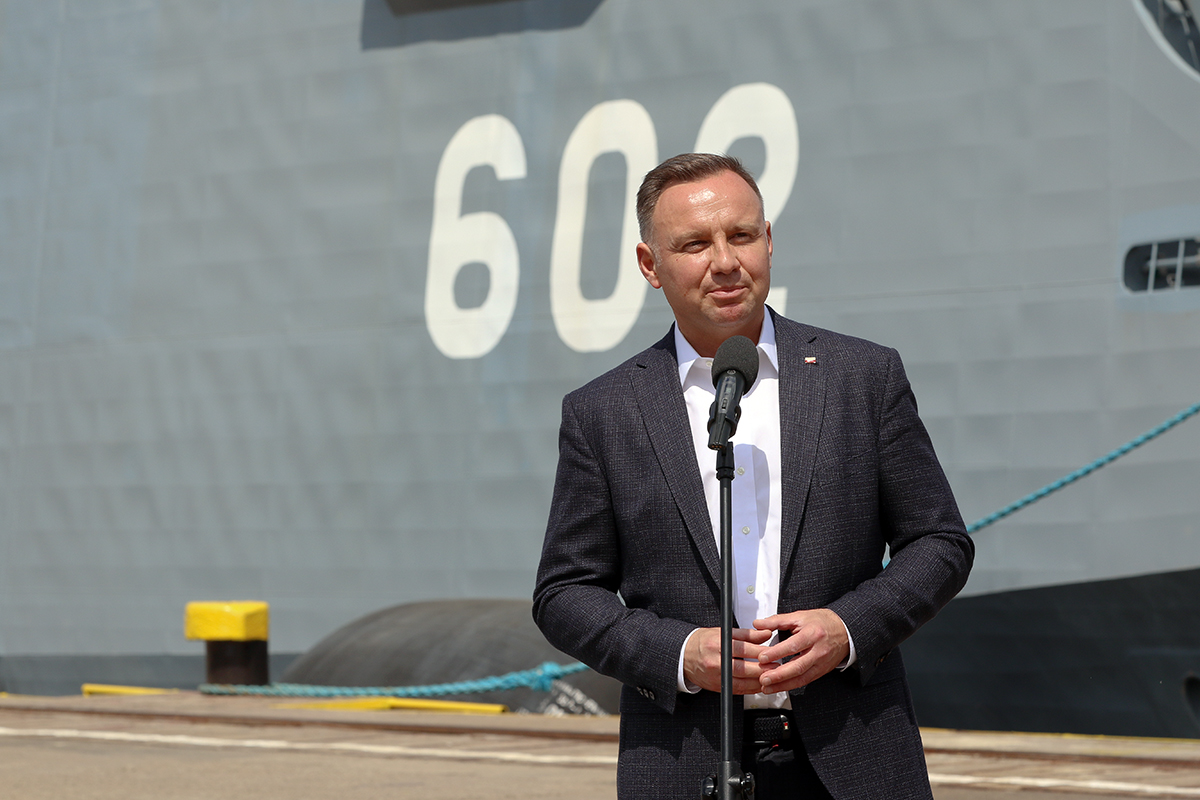 – I look with pride at the Polish shipbuilding industry which is represented here,” President Andrzej Duda, the Commander-in-Chief of the Polish Armed Forces, said on Thursday during his visit to the Remontowa Shipbuilding SA shipyard in Gdansk. As he added, shipyards from the Remontowa Holding capital group “repair and build ships, thus representing the Republic of Poland on a global scale”.

President Andrzej Duda, on his way to the construction of the shipping channel through the Vistula Spit, visited the shipyards of Remontowa Holding capital group. First, he viewed the Remontowa Gdańsk Shipyard SA from the deck of a vessel of the Border Guard. He also met with the management board, managerial staff and shipyard workers. Then he visited the Remontowa Shipbuilding SA shipyard, where modern mine destroyers of the 258 Kormoran II project are being built for the Polish Navy.

“The programme pk. Kormoran programme at this stage means the construction of three mine destroyers for the Polish Navy. The first one, ORP Kormoran is already sailing, ORP Albatros is undergoing sea trials and ORP Mewa will soon join them,” – President Andrzej Duda said after his visit to Albatros, adding that he hopes for the realisation of further tasks.

The mine destroyers are built by a consortium led by Remontowa Shipbuilding. It also includes the Research and Development Centre of the Maritime Technology Centre and the PGZ Military Shipyard. The prototype ORP Kormoran, commissioned into service in November 2017, was the first work of exclusively Polish industry in 20 years, from the design to the delivery of a fully equipped, modern vessel to the Employer. The cooperation in its construction resulted in the ordering of further mine destroyers – ORP Albatros and ORP Mewa.

“I am proud to see the Polish shipbuilding industry represented here and still developing. I am glad that the management of the Remontowa Shipbuilding SA shipyard has proved that it is capable of building mine destroyers. It was said that it is impossible in Poland. The ships were built in this shipyard, entirely according to the most modern, world-class technologies. Today they are the most modern mine destroyers in the North Atlantic Alliance”. – President Andrzej Duda emphasised.

“Today Remontowa Shipbuilding S.A. is a part of a consortium which together with Polska Grupa Zbrojowa prepares to carry out the program pk. Miecznik, i.e. the construction of three frigates for the Polish Navy. It is a huge undertaking which is of great importance for the modernisation of the Polish armed forces” – said the President adding that the shipyard is able to cope with this programme.

“It is a great satisfaction for me that the construction of units for the Polish Navy is finally returning to the Polish shipyards. We have great experts who know how to build ships and talented young people who will be able to handle even the most difficult tasks in the future. I wholeheartedly congratulate Remontowa Holding group and I thank on behalf of the whole society that such tasks can be performed here” – stressed President Andrzej Duda.

At the end he thanked the management of Remontowa Holding, boards and all employees for the opportunity to see the infrastructure of the biggest Polish shipbuilding group and to learn about specificity of ship building and repair industry.